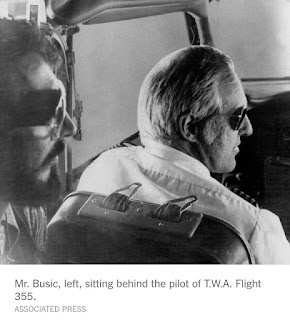 Can you believe this narrative of a 9/11, 1976  hijacking with it's fake bombs, absurd love stories, CIA connections, and unbelievable "coincidences"? 25 years before the far more infamous hijacking??? I don't think that I can.


TWA Flight 355 was a domestic Trans World Airlines flight which was hijacked on September 10-12, in 1976 by five "Fighters for Free Croatia", a group seeking Croatian independence from Yugoslavia.

The Boeing 727, TWA 355 took off from New York's LaGuardia Airport and was headed to O'Hare International Airportin Chicago. The hijackers were Slobodan Vlašić, Zvonko Bušić, his wife Julienne Bušić,[2] Petar Matanić, and Frane Pešut. The hijackers claimed to have a bomb as they seized control of the plane in the 95th minute of its flight; the alleged bomb on board was actually a pressure cooker.

The group redirected the plane to Montreal's Mirabel International Airport where they refueled and told officials that they had planted a bomb in a locker at Grand Central Terminal and gave them instructions on finding it. They demanded that an appeal to the American people concerning Croatia's independence be printed in the New York Times, the Washington Post, the Chicago Tribune, the Los Angeles Times, and the International Herald Tribune. The hijackers also demanded that pamphlets be printed detailing the alleged persecution of their fellow countrymen, and that these be dropped by other aircraft flown over Chicago, Montreal, New York City, London and Paris. Nearly all of their demands were met. The plane was then flown to Gander, Newfoundland, where 35 of its passengers were released. From there the plane was accompanied by a larger TWA plane which guided it to Reykjavík, Iceland. The hijackers' initial European destination was London, but the British government refused them permission to land.

During the hijacking the device at Grand Central Terminal was found and taken to Rodman's Neck Firing Range where police attempted to dismantle it rather than detonate it. After setting a cutting instrument on the two wires attached to the device, the officers retreated from the pit for several minutes. They then returned to the pit to continue dismantling the device when it exploded and killed an officer, Brian Murray, and wounded another, Terrence McTigue on the morning of September 11th.

The plane landed in Paris where the hijackers surrendered after a 12-hour standoff on Sunday, Sept. 12 after direct talks with U.S. ambassador Kenneth Rush, and their supposedly explosive devices were revealed to be fakes.

Richard Brockman was reportedly one of the passengers of flight 355 and he is credited in a 1976 article in The Atlantic to have written this account in his journal during the hijacking:

"This is the captain speaking." His voice is clean, no cracks. "We have all been through an incredible experience. But it is over for us. No one is hurt. However, it is not over for our hijackers. Their ordeal is just beginning. They have a cause. They are brave, committed people. Idealistic, dedicated people. Like the people who helped to shape our country. They are trying to do the same for theirs. I think we should all give them a hand." I look around me. The hijackers are smiling. The audience is applauding. It has come full turn.

It is the oily-skinned one (Busic). "We are going to give ourselves up, and take our cause to the United Nations. To be tried by the peoples of the world."
Last rites. A nightmare on stage. Boys come of age. Have a drink. [*] 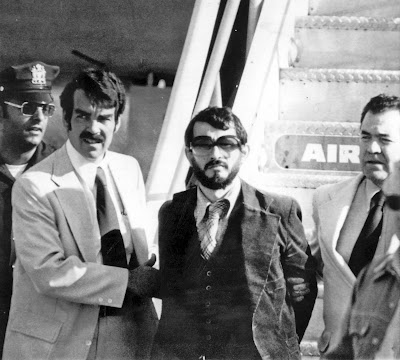 
As the police took Julienne Bušić away, the plane's pilot gave her a hug in gratitude for her calming of the passengers during the hijacking. [*]


when it was all over the hijackers pulled apart their “bombs," including some attached like a bulky necklace around the neck of one. and distributed chunks to the passengers as souvenirs. [*]


The fake pressure cooker bomb was given to one of the crew members as a souvenir. [*]...If one or two bombs were fake then maybe, just maybe, they all were

In March of 1979, Lynette "Squeaky" Fromme (best known as a member of the infamous "Manson family" and also famous for allegedly attempting to assassinate U.S. President Gerald Ford in 1975 for which she was sentenced to life imprisonment) attacked Julienne Busic while in prison. Squeaky hit Busic in the head with the claw end of a hammer and she received 15 months added to her sentence [*]  [*] 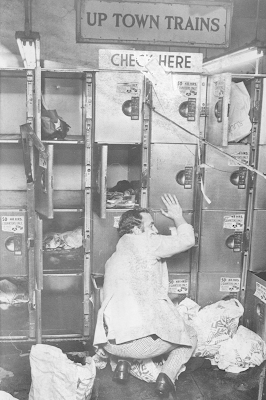 Kathleen Murray Moran’s heart sank when the camera began panning Grand Central Terminal and she saw her husband in his NYPD vest, removing what appeared to be a harmless shopping bag from one of the lockers. [*] Kathleen Murray Moran told NPR "On the screen, I watch as he lifts a Macy's shopping bag, then he laid a blanket on the ground. And he and his partner placed the shopping bag on the blanket and then clipped the blanket to a pole (rod). And the two of them lifted the pole (rod) to their shoulders and walked out of sight."[*] The cameras didn’t show Murray and his unit bringing the bomb back to the department range at Rodman’s Neck in The Bronx, where three officers — including her husband — began defusing it. It exploded shortly before 1 a.m. on Sept. 11th [*]. At a wrongful-death trial, Murray Moran learned her husband had been killed by a piece of the bomb that sliced his neck. But she lost her lawsuit to learn why the bomb had detonated. [*] .....So the man who carried the bomb out on a rod had his neck severed at Rodman's Neck??? On 9/11??? So goes the narrative. 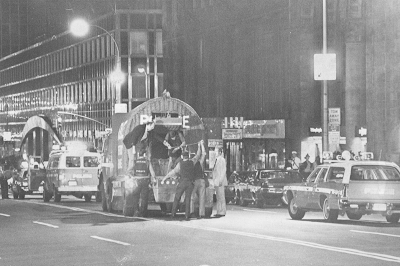 Kathleen Murray Moran ended up corresponding with Julie Busic for three years, writing to the convict both before and after she was paroled from prison in 1989. The two women shared 50 letters between them, Murray Moran said. Kathleen Murray Moran admitted being attracted not only by the Oregon-born Busic’s blond looks but also by her strange story. “I knew it made no sense, but my appetite for Julie’s letters and their intensity felt almost sexual in nature,” Murray Moran revealed in her memoir. “She wrote like a lover, crawling back to me, and sometimes I found I had memorized lines of her letters without meaning to.”[*]. Murray Moran said, she wrote a letter to the parole board to help get Julie released. Julie Busic had told her she was divorcing Zvonko and wanted to start a fresh life. Kathleen Murray Moran told NPR Radio in a interview, "I decided to write to the parole board to set her free.". She also told the host of her lunch date with Busic after she had been paroled, "She didn't look like she had been in prison for 13 years. She took me into an embrace, and she said, oh, my God, you're so beautiful. I thought to myself, no I'm not, you are, you know?" [*]...So the widow of the sole victim in this "terrorist attack" falls in homosexual love with the "terrorist" who kills her husband and she also seeks to release her from prison??? Sure, why not?

Life Detonated: The True Story of a Widow and a Hijacker by Kathleen Murray Moran...The tagline states, "A memoire that reads like fiction". 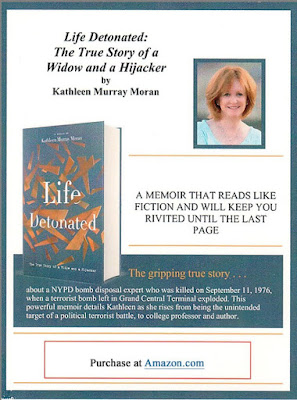 Upon parole Julienne Busic was given the title adviser by the Croatian Ambassador to the United States, Petar Sarcevic, and entrusted with handling much of the embassy's cultural and press affairs. She participated in meetings last month of Croatia's Defense Minister, Gojko Susak, with American reporters about the war in Bosnia. [*]

A FOIA request for the records of Bruno Busic, the Croatian dissident nationalist and the manifesto writer for the hijackers of TWA-355; as well as cousin of highjacker Zvonko Busic has been released. In one of the documents released which is titled "New Trials in Yugoslavia May Point Finger at CIA" is a single page from the 21 September 1972 Eastern Europe Intelligencer in which the CIA reported that Bruno Busic was on trial, accused of working with “unspecified foreign intelligence service,” and they stated that "although CIA is not mentioned by name, the implication is clear" which in the case of Busic meant the CIA.  [*] [*] 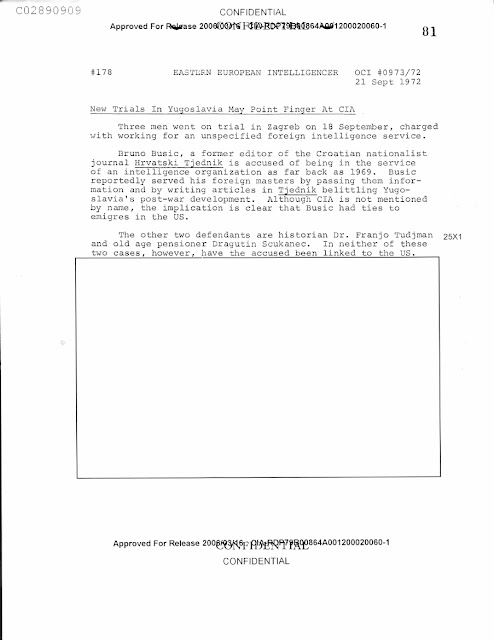 There was apparently a photographer on board TWA 355 who had access to the cockpit and was permitted to photograph the mastermind, Zvonko Busic. 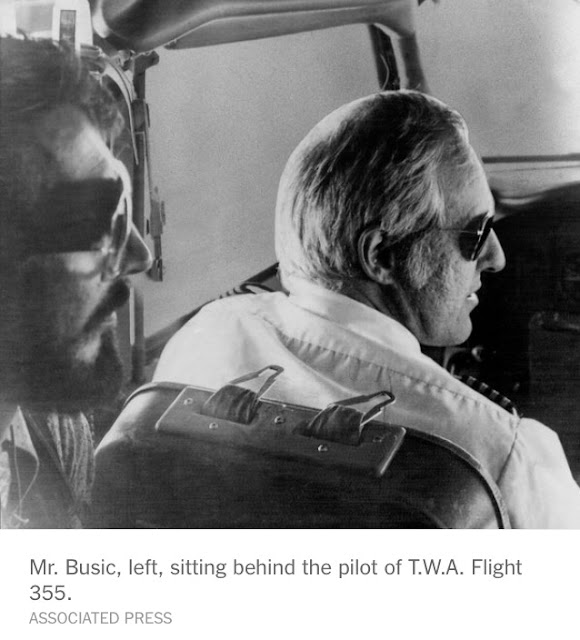 
The incident occurred on the same day as the Zagreb mid-air collision, which to date remains Croatia's worst air disaster when 2 planes collided in mid-air. [*]

Zvonko Busic was granted parole in July 2008 after 32 years in prison, on the condition that he leave the United States. He and Julie moved back to his homeland and was hailed a hero of the country’s struggle for statehood [*] . But on Sept. 1, 2013, Zvonko committed suicide at the age of 67 by shooting himself at his home. Mr. Busic was active in politics after he returned to Croatia. On Wednesday, in Zagreb, the capital, prominent Croatian politicians joined hundreds of others in giving him a hero’s funeral. [*]...Dude lasts just short of 33 years in prison, gets released and welcomed as a hero in the country that he helped to free and then kills himself??? If they say so, I guess.

By Masonic Youth/NotSoFreeMason - December 20, 2017 and re-posted here on January 02, 2018
NotSoFree Mason AKA Masonic Youth
. I'm NotSoFreeMason AKA Masonicyouth. I research media fakery from my own perspective. I got started in actively researching with trying to break down the Punk Rock scene with the incomparable John Adams and by posting my findings at thefourhorsesasses blog(my posts are no longer there). In 2018, after a year of posting at 4HA, I moved many of my old research posts to my own blog site @ thefauxagenda.blogspot.com. I continue to observe the narrative and whenever a red flag appears I try to dig in a little deeper in to the stories of our Mass Media Narrators and expose the inconsistencies, agendas and manipulations. My Blog: FAUX AGENDA thefauxagenda.blogspot.com 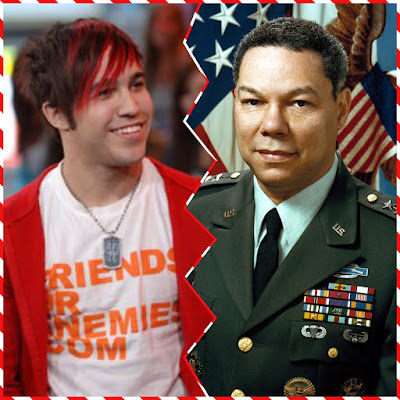 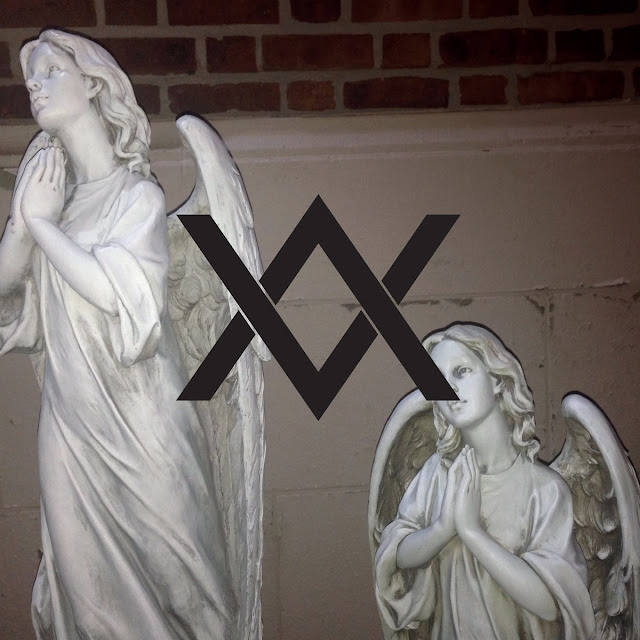